Statistics And Surveillance Of Hepatitis In USA

In the year 2015, a survey was carried out by the Centers for Disease Control and Prevention, in the United States of America, for a total of 2436 cases of acute Hepatitis C that were reported from the 41 states. However, the statistical data for the year 2015 was unavailable for the following ten states; Alaska, Arizona, Connecticut, the District of Columbia, Hawaii, Iowa, Mississippi, New Hampshire, Rhode Island, and Wyoming. From the data collected during the surveys, an increase was found in the overall incidence level of the disease. The incidence rate was seen to have increased than its 2011-2012 figures and now amounting to 0.8 cases for a population of 100,000 people. Since every case of the disease was not reported, therefore the estimated actual number of cases was estimated at being 13.9 times of the reported ones. Thus, after careful examination and making up for the lack of reporting or patient turn-up, it was estimated that 33,900 acute Hepatitis C cases occurred in the year 2015.

An individual was said to be suffering from acute Hepatitis C if he was found positive on one or more of the below mentioned three tests:

A proper screening test for the antibodies developed by one’s body against the Hepatitis C virus, i.e., the anti-HCV strain and checking them with the correct requisite parameters as is deemed to be declared positive by the CDC. The basis for checking out to be positive here is a particular signal to cut-off ratio

The Nucleic Acid test is done after the anti-HCV test gives a positive result, for HCV RNA- it is an amplification test which checks for further presence of the virus present in the blood sample

Also, two advanced criteria were to be met by performing additional tests for a positive result:

Reported Cases Of Hepatitis C, Nationally And State-Wide By Jurisdiction

For the period 2011-2015, the following cases were observed and the data and figures collected have been represented as follows:

3 State-wise, for the year 2015, the actual rates of acute hepatitis C among the population could be seen as having no cases reported in North Dakota to a massive 3.7 cases for every 100,000 population in Massachusetts.

4 Out of the 41 states that were reported, the ten major affected states were Florida, Indiana, Kentucky, Massachusetts, New Jersey, New York, North Carolina, Ohio, Pennsylvania, and Tennessee. It accounted for nearly 59.6% of all the acute hepatitis C cases that were reported in the year 2015 and thereby posing them as states being unsafe for people instead of the Hepatitis C virus. 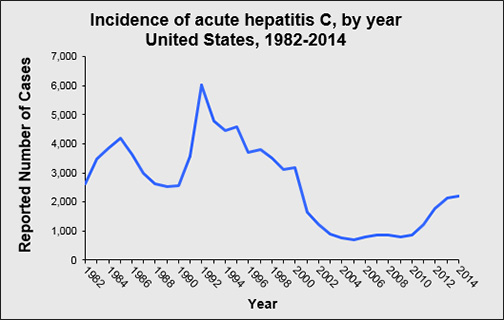 The below are some of the characteristics shown by the infected people on the various cases that were considered during the said period of study:

From the surveillance reports on the survey carried out by the CDC, it was found that the reported new cases of acute Hepatitis C showed an increasing trend every year with starting from only 694 in the year 2005 and growing to 2194 cases in 2014. The estimated actual new cases of the acute disease being around 16,500 in 2011 and increasing to 30,500 in 2014. The established number of chronic cases in the States has been estimated to be 2.7-3.9 million with the number of deaths increasing from 16,627 in 2010 to 19,659 in 2014. The total number of cases has shown an increasing trend from 2010 onwards thus making it a cause of concern.

Hence, the statistics show the massive impact of Hepatitis C on people. Therefore, taking preventive measure to eradicate this virus completely becomes all the more important.